This week Ottilie had fairly major surgery. The poor little mite only went and had a bloody great tumour removed. Her surgery was on Wednesday this week, it is currently Saturday, and she is already snoozing soundly in her own bed after ‘boobie two’. She is recovering so well she was discharged three days earlier than planned. What a champ.

For the purpose of this all making sense, I am going to put it into a diary type format (like blogs were originally written if you will). That way when I waffle on for too long you can take a break and slide straight in where you left off. I have also split it into two posts as it is quite a lengthily story to tell… We took O to the GP to discuss her ongoing issues with constipation. For some background, Ottilie has had issues with constipation since she was about 16 months old and we regularly give her Movicol as prescribed. Amy also spoke to GP because she had been able to feel a lump on the lower right side of Ottilie’s stomach, one of Ottilie’s keyworkers had also said to me that she could feel something whilst she was trying to massage her tummy to help her poo. The GP attempted to examine O but she wasn’t keen aka having a meltdown. He said that her stomach felt fine and to come back if we had any other concerns.

We went back and saw the same GP – had the same conversations around the constipation and the lump only this time Ottilie’s belly button had gone from the perfect ‘innie’ to the top popping out and folding over the bottom half. He began by saying ‘oh she’s growing, they change all the time etc etc’ and only when I asked if there was a possibility of an umbilical hernia did he examine her again. He agreed her belly button didn’t look quite right and agreed to refer us. To be honest we only went there for the referral.

We were referred to the same paediatrician that had treated O for silent reflux previously as he specialises in digestive health in babies and children. We had really good conversation around bowel health and diet as he believed we could do more to help relieve O’s constipation (he wasn’t being shitty (pun intended) about it but he was quite frank about how as a society we don’t look at our diets enough when we have issues). He examined O and was quite happy that she was fit and healthy. He also couldn’t feel the lump but offered us an ultrasound for peace of mind.

So as previously alluded to – Ottilie is not keen on being handled/restrained. Sometimes changing her nappy is like trying to put socks on an octopus and I am her mama. Getting O to lie down on a hospital bed whilst a stranger has a little prod around her stomach with a wand seemed like an impossible task. Amy laid down first and laid O on top of her – then Amy basically restrained her with her arms and legs. The sonographer did a brilliant job given the hostile circumstances – myself and the nurse failing miserably trying to distract O, Amy singing the first line of EVERY nursery rhyme before Ottilie would shout no and continue writhing around like that octopus I mentioned earlier. When we left that room, we knew that O had a mass, the sonographer was the first person who had confirmed that we had been able to feel something and we weren’t imagining it. Through the ultrasound we knew it was approximately 9cm x 6cm x 8cm. So not small. I went to work straight after and had an ugly cry to one of my mates. 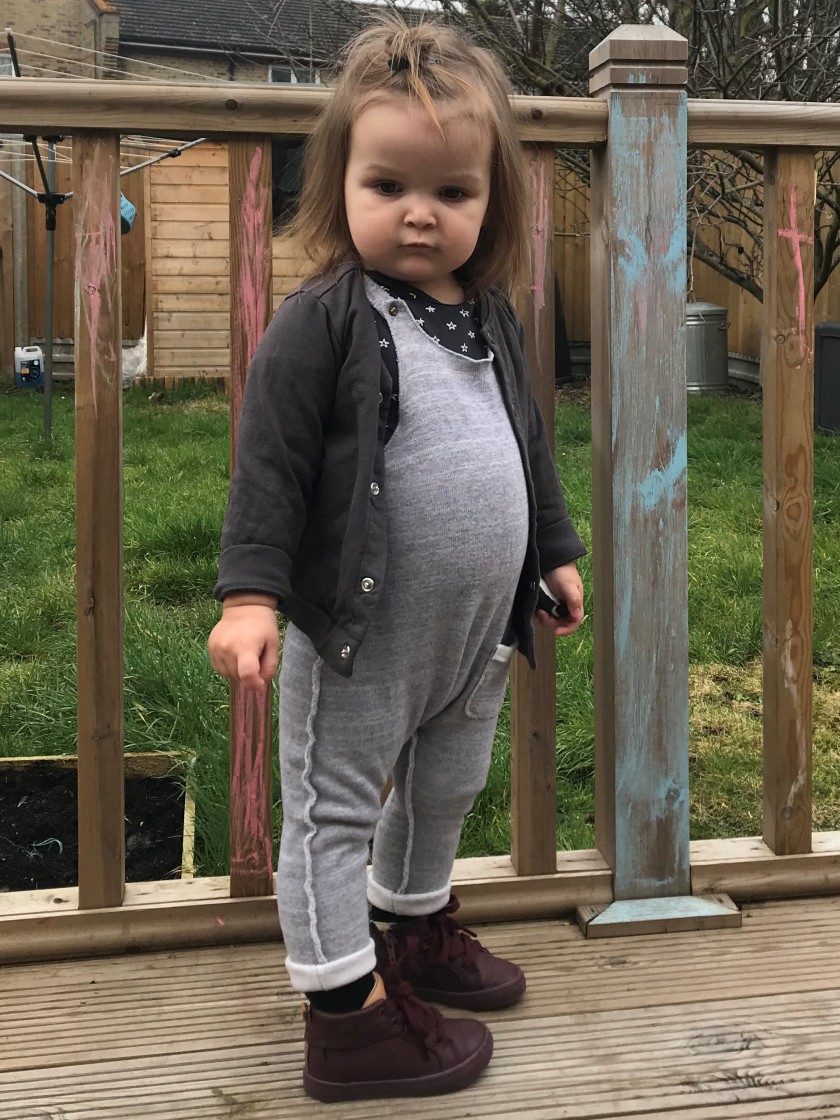 After this appointment Amy made/received a lot of phone calls to hospitals/from the paediatrician. He ascertained that the mass was not from any of her digestive system but was potentially ovarian. Because of this, he now wasn’t the right man for the job but he went above and beyond to find someone who was. He answered emails out of his normal working hours and called us from home to expedite the process. Amy always has a lot of questions and he answered them with patience and kindness – he did a brilliant job of stripping out the emotion and encouraging us to take a logical thought process. Fast forward through all of that ‘admin’ and we were booked in for an MRI at The Portland in London. Cue lots of trains. 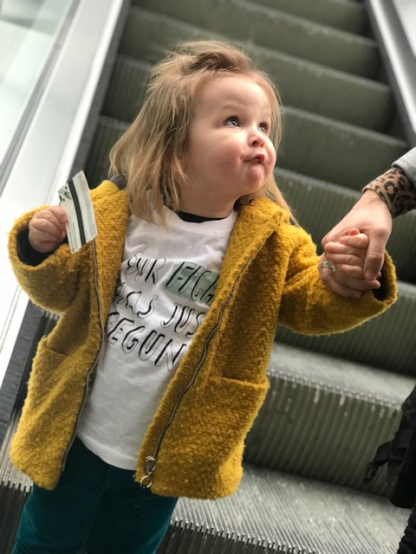 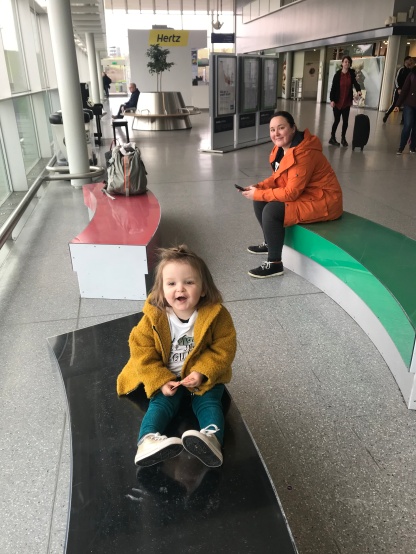 The MRI was booked for 12:30, so O was nil by mouth from 08:30 due to the general anaesthetic required. We hopped on the train and met our friend in the park nearby to the hospital for the ultimate distraction. By the time we got to our appointment Ottilie was ravenous and could not understand why she was being denied ‘boobie two’, which has always been on demand. O went down for the scan… We were expecting to wait an hour for the MRI to be completed but it was 2.5 hours later when the anaesthetist came and got us – I had long since abandoned my book and Amy was no longer distracted by Bob Ross and his joy of painting. The team had already told us we wouldn’t be given any results on the day but when we left there at 6pm the images were handed to us on a disc. We chose not to look. 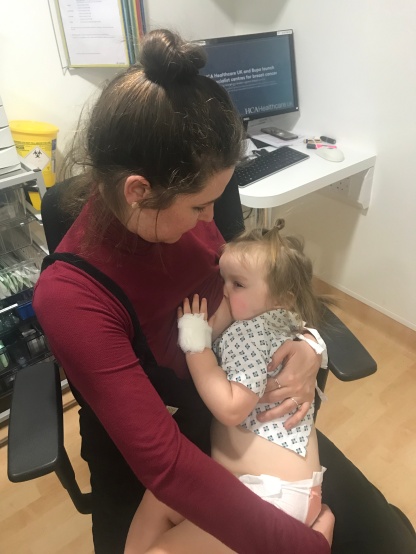 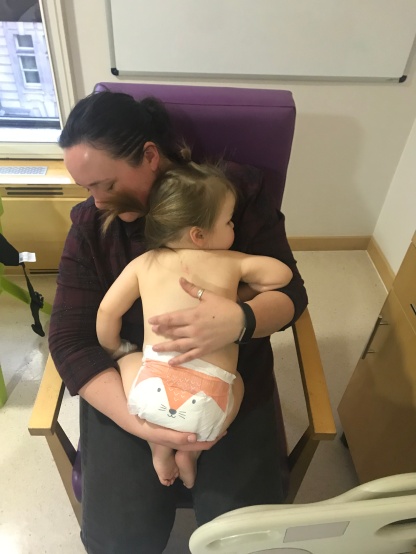 We met a specialist paediatric surgeon at our local hospital, who had read through the report submitted from the MRI and he had an idea of a diagnosis. He attempted to examine Ottilie, but she wasn’t feeling it (meltdown anyone?) and just wanted to finish colouring her Troll picture. He felt enough to say that it was big, and it needed to come out. We gave him the disc so he could view the images as at this point, he had not seen them – cue him running around the hospital trying to find a compatible computer because the two he had wouldn’t read the disc. He made a couple of phone calls trying to get them sent over but with no success. He spoke candidly, and although unlikely, there was a potential that the mass was malignant, he was the first person who had really eluded to that being a possibility and was thorough in his explanation of how either a benign or malignant mass would be treated.

Based on the information he had, and obviously his experience he loosely diagnosed the lump as a teratoma. Feel free to have a Google – I feel like all paths lead to cancer when you Google medical issues, so I won’t include a link. In short a teratoma is a tumour made up of varying types of tissue: muscle, skin and bone. They have been known to also have teeth and as such are sometimes referred to as ‘monster tumours’.

The surgeon was due to leave the country in 7 days so he decided he needed to pass us on to someone who would be able to do the operation ASAP and be available for the post op follow up. Ottilie had bloods taken to check for any markers that would indicate malignancy. We were told it was a five day wait on bloods. And five days is a long time to wait.

As promised, this a long one and part two is just the same. To be continued…